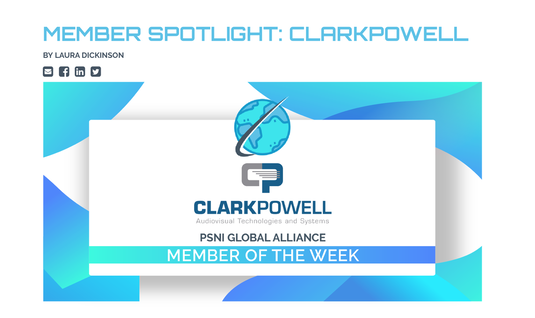 ClarkPowell is a Global Company with Family Values
With everything that the Carolinas have to offer, one thing Read Clark felt was missing was a company that would offer exceptional service and superior value to AV professionals throughout the Carolinas. So, he founded ClarkPowell in 1983 to meet the need. More than three decades later, with four offices and averaging between 400 and 500 AV integration jobs completed each year, ClarkPowell is still a family company at its core. Read’s daughter, Stephanie Clark Bluhm, took over the presidency of the company in 2010. In 2016 her sister, Susan Clark Pinch, stepped in as president after Stephanie’s unexpected passing.
The Clark family is loyal to ClarkPowell—since 1983 not a single employee has ever been laid off. And that loyalty is returned. The first employee ClarkPowell ever hired retired in 2020. ClarkPowell is also a loyal member of PSNI—the company joined in 1990 as one of the first PSNI affiliates. ClarkPowell has partnered with other PSNI affiliates including Avidex, Cory's AV, Conference Technologies, Datavision, and HB Communications to complete AV integrations around the world.

And it’s not just work that has taken ClarkPowell all over the world. As a PSNI affiliate, ClarkPowell employees have enjoyed plenty of international fun, too. “I think my most memorable moment with PSNI was the PSNI meeting in Barcelona,” said Susan. “We had a wonderful dinner at a gorgeous castle where we were able to make friends with many of the new international PSNI members. And the visit to the Sagrada Familia—what an incredible opportunity to visit such a magical landmark!  An opportunity that would not have been possible without the hard work of the PSNI team.”
​
Flexibility is the Future and ClarkPowell is Here for It
With more than three decades in the industry and thousands of successful projects completed, ClarkPowell has weathered plenty of changes and passing fads in AV integration. These days, Susan said, flexibility is king, whether it’s flexible spaces, flexible tools, or flexible integrations.
​
“We have seen a definite shift from traditional meeting rooms to clients wanting far more flexible spaces, such as multi-purpose rooms, huddle spaces and even open collaboration areas. This is being driven by the Millennial generation, as they tend to prefer a less structured work environment, working flexible hours and collaborating on-the-fly,” Susan said. “We also continue to see the merging of AV and IT with standards such as AVB, SDVoE, AV over IP and Dante working over standard network switches, rather than the traditional AV matrices that we have used in the past. We have had to become IT specialists in order to implement many complex systems.”