"After we guided an initially apprehensive, technology-averse professor through the touchpanel interface a couple of times, she loves teaching in that room and tries to retain ‘squatters rights’ to the room. That’s how easy the AV controls are, the way we set it up with coding help from ClarkPowell and Extron." 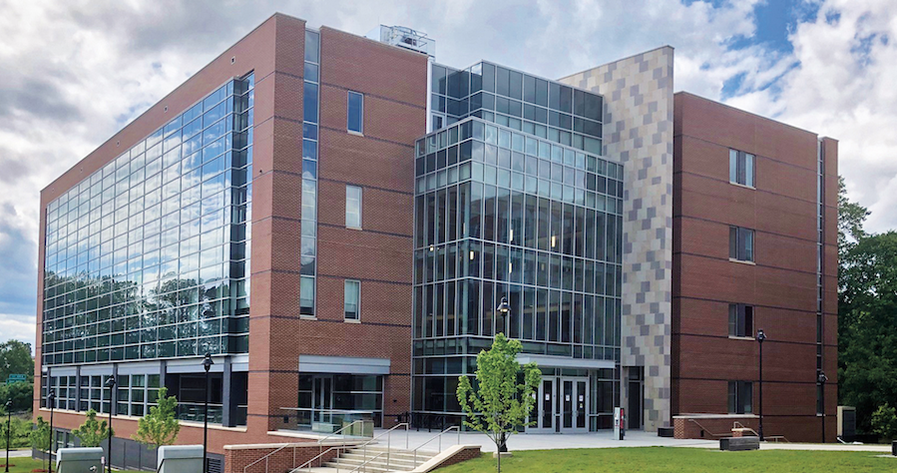 Winston-Salem State University – WSSU – was founded in 1892 with 25 students and one teacher in a one-room schoolhouse. In 1972, it became part of the University of North Carolina. Today, WSSU is educating 5,169 undergraduate and graduate students on it’s 117-acre campus. It offers 40 undergraduate majors and 10 masters and doctorate programs in arts, entertainment, business, communications, social justice, science, technology, engineering, math, and health.

The STEM-H programs are now benefitting from high-tech classrooms, lecture halls, and labs in the New Sciences Building, opened to students Spring 2021. The $53.3 million, 102,095 square foot, 5 story facility has 24 AV-enabled learning spaces, including classrooms, study rooms, lecture halls, and a makerspace where DIY and education converge. AV design, installation, and commissioning in the new building were accomplished under a tight schedule by Winston-Salem based pro AV integration firm ClarkPowell, whose Account Manager Lee White coordinated with WSSU Technology Support Analyst Chris Screen to get the job done on-schedule and on-budget. Extron supported the project with timely delivery of 600 items of AV equipment and responsive assistance with AV system control programming.

Seventeen classrooms, labs, and study areas are equipped with PlenumVault® digital classroom systems that include a PVS 407D switcher with integrated AV system controller and audio amplifier. The switcher receives input signals from a PVT HDMI wallplate and a ShareLink Pro 1100 Wired and Wireless Presentation System. The wallplate handles two HDMI sources, typically from the instructor. Students share content from their portable devices over Wi-Fi via the ShareLink Pro 1100. Video is displayed by a single ceiling-mounted projector and audio is played over FF 120T Flat Field® ceiling-mounted speakers. An IPL Pro S3 control processor augments the switcher’s integrated controller, providing an interactive graphical user interface on a TLP Pro 525M 5" TouchLink® Pro Touchpanel. All system components except the HDMI wallplate and the touchpanel are hidden in an enclosure above the suspended ceiling.
​
Five of the building’s large classrooms have multiple displays and wireless mics. One of these rooms is a divisible space with a projector and a 65” flat panel display on each side of the movable partition. The other four rooms have one projector for the screen at the front and two 65" flat panel displays along the sides. Mobile desks allow students to form ad hoc collaboration pods gathered around each display. AV content can be sourced from DTP wallplate transmitters with HDMI and DisplayPort inputs. Students can share content via three ShareLink Pro 1100’s – one for each screen.
​
A DTP CrossPoint 84 4K matrix switcher routes each source to the appropriate screens based on selections made at a TLP Pro 1025M 10" TouchLink Pro Touchpanel interfaced to the switcher’s integrated IPCP Pro control processor. The switcher’s 100-watt audio amplifier drives six or eight FF 220T Flat Field ceiling-mounted speakers, depending on room size.
​
The divisible room has two of everything that the other large classrooms have, plus a Blu-ray player and features a DTP CrossPoint 108 4K matrix switcher for increased switching capacity. The switcher’s integrated audio amplifier drives ten FF 220T speakers on one side of the room, while an XPA 2001 amplifier drives ten more speakers on the other side. A TLP Pro 1025T 10" Tabletop TouchLink Pro Touchpanel at the AV rack augments two TLP Pro 1025M's on opposite walls of the room, providing a single point of control for both sides of the room if needed.

In the Makerspace, students work in tight-knit teams to turn concepts into products using 3D printers and other tools. A basic AV system provides all the functionality required to share ideas across the working group. The AV system is built around an HC 403 Meeting Space Collaboration System. AV sources are plugged into an HC 403 transmitter wallplate that auto-switches between two inputs, or people can connect wirelessly via a ShareLink Pro 1100. The HC 403 receiver features built-in control capability and supplies the selected AV source video to a 1080p laser projector and mono sound to ceiling-mounted FF 120T speakers via an MPA 601 amplifier. Users control the system using an interactive graphical interface presented on a TLP Pro 525M TouchLInk Pro Touchpanel. All system components except the wallplate and the touchpanel are housed in an enclosure hidden above the suspended ceiling.

Every AV enabled room in the building provides a similar touchpanel user interface, creating a uniform experience that instructors and students appreciate. To emphasize this point, WSSU Technology Support Analyst Chris Screen relates an experience with a professor who was initially apprehensive about using the AV systems in this new building. Chris guided the professor through the touchpanel interface tap-by-tap. After a couple of tries, she brightened and said, “this is as easy as my phone.” Chris says, “She loves teaching in that room and tries to retain ‘squatter’s rights’ to the room. That’s how easy the AV controls are, the way we set it up with coding help from ClarkPowell and Extron.”

WSSU has been using Extron AV systems on campus for years. So, it’s no surprise that when professors stepped into their classrooms in the New Sciences Building for the first time at the start of the Spring 2021 semester, they knew just what to do with their new advanced AV tools to enrich their pedagogy and increase student engagement. Multimedia audiovisual presentations are an integral part of every class taught in this building, as can readily be seen in the photos contained in this article. So, what’s next on the AV front at WSSU?
​
Chris Screen says that he'll spend part of the summer installing and evaluating cameras and Extron SMP 111 streaming media processors in select classrooms to implement hybrid learning. During run-up to the opening of the New Sciences Building, WSSU pivoted to a COVID-19 pandemic posture. Classes were taught remotely via Zoom. With campus reopened, some instructors and students still prefer to stay remote at least part time. To accommodate this new reality, the school is looking into streaming from classrooms with SMP 111 streaming media processors.